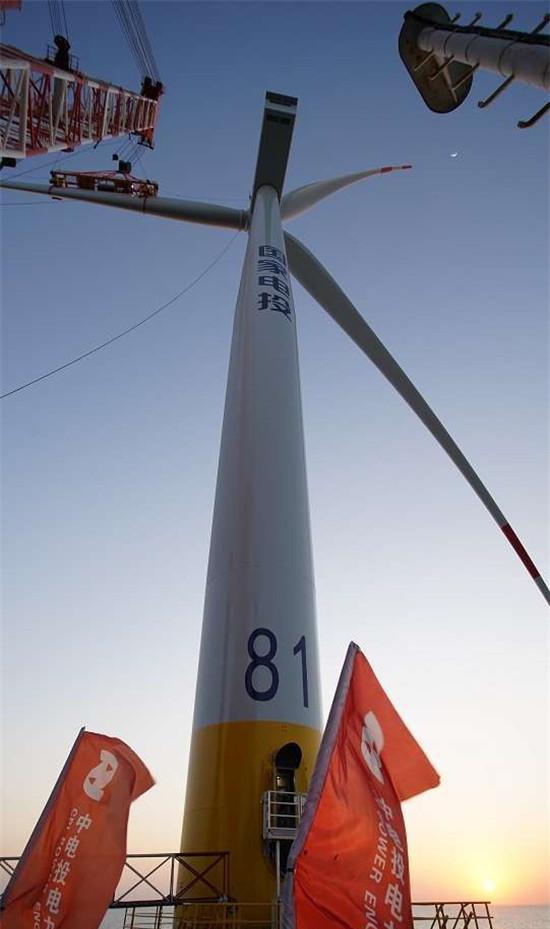 It is understood that the State Power Investment Corporation Rudong Offshore Wind Power Project is located in Rudong Sea area and the north side of the port boundary of Yangkou Port. The total installed capacity is 800 MW and the total investment is about 14.8 billion yuan. The project plans to construct two 400,000-kilowatt offshore wind farms H4# and H7#. The distance from the center of the site is 33 kilometers and 66 kilometers from the shore respectively. 100 Shanghai Electric 4MW wind turbines will be installed each. Currently, the H4# project, which has a relatively fast progress, has completed the first wind turbine hoisting and construction of 16 single pile foundations, and the H7# project has completed the construction of 8 single pile foundations, and plans to carry out the first wind turbine hoisting in the middle of this month. 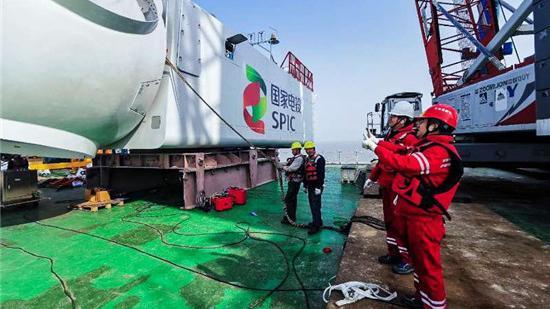 The total weight of the No. 81 wind turbine that was successfully hoisted this time is 257 tons, of which the nacelle of the wind turbine is 142 tons and the hub is 56.2 tons. The two pieces of equipment are pre-assembled on the hull deck and then hoisted as a whole. The hoisting weight is 198.2 tons; the blades are single blades. With the hoisting technology, the construction party successfully hoisted the blade with a single weight of 19.6 tons to an altitude of nearly 100 meters in three times to achieve precise pairing with the wheel hub. It is reported that from the beginning of the hoisting on November 6 to the smooth completion on November 8, the entire hoisting process took a total of 82 hours.

In contrast to the project's goal of connecting the first batch of units to the grid for power generation in the first quarter of next year, the project department is simultaneously advancing the onshore centralized control center and offshore booster station projects. It is expected that at the end of this month, the land-based centralized control center will start electrical installation, and in December, the sea booster station will be shipped out to sea. "The entire project plans to achieve full-capacity grid connection before the end of next year. After the entire site is put into operation, the annual power generation will reach 2.4 billion kilowatt-hours." State Power Investment Corporation Jiangsu Rudong 800MW Offshore Wind Power Joint Project Department (H4#, H7#) Executive Deputy Manager Wang Bingyong said that the full completion of the project marks another major step forward for the State Power Investment Corporation to build two million-kilowatt offshore wind power bases in Yancheng and Nantong.

It is worth mentioning that this project is also the most “profitable” offshore wind farm project that spurs Rudong offshore wind power industry-related companies. "More than 90% of the offshore equipment for this project is provided by Rudong's local enterprises. For example, the wind power main engine is assembled by Shanghai Electric; the steel pipe piles and towers are supplied by Haili Wind Power; the submarine cable is provided by Zhongtian Technology Group. This year, The project plans to complete the investment of 5.6 billion yuan." Wang Bingyong told reporters that from equipment matching to construction, the project will bring more than 10 billion orders to Rudong offshore wind power industry chain upstream and downstream enterprises, and become a powerful driving force for Rudong county economic growth.” One of the engines. (Headquarters CCTV reporter Huang Cheng).